Twice a week at Rogers Hospital, Jesse joins the other kids in the OCD program for “experiential therapy” (the inevitable ET). I didn’t know what those two words together mean. It felt jingoistic. So I googled it and learned that it means doing activities that encourage the patient to identify and come to grips more indirectly with “hidden or subconscious issues.” Still felt jingoistic. I’m sure it’s more extensively thought out than I’m describing it, but basically the kids sit around and do stuff together — art, meditation, story telling, I don’t know, basket weaving.

Jesse’s first couple weeks, her behavior during ET was so outrageous that they booted her from it the third week. Our behavioral specialist (you got it, our BS) told me about the plan, and I remarked that this wasn’t going to go over well. Sure enough, when he told Jesse, she folded over in two and wailed, “OH GREAT I’M A FAILURE ALREADY!”

Excellent, excellent. ET in action, helping Jesse come to grips with all new levels of as-yet-unidentified self-loathing, with the  assistance of her trusty BS.

But she went back and has struggled on, week after week, yawping and interrupting through bouts of ET. A few weeks ago, the kids made “OCD masks.” They were each given a white paper mache mask to draw and color on, with instructions. Counterintuitively, the inside of the mask depicts how the child believes others perceive her. The outside of the mask depicts how the child perceives herself.

Jesse brought her mask home recently. Here’s the inside of Jesse’s mask: 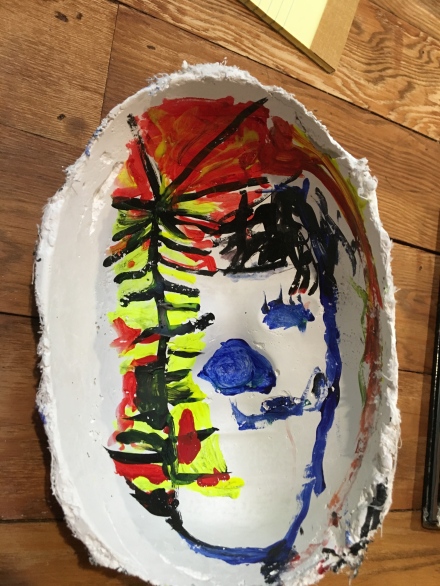 Jesse told me this is intended to show that others see her as “kind of crazy.” She doesn’t mean that in a pejorative way. She means something more along the lines of “kooky,” as in she likes to get goofy and silly, she likes to go a little crazy when she’s having fun, she’s got a lot of pent up energy. So she chose bold primary colors and sharp lines, to show that energy and craziness.

Here’s the outside of Jesse’s mask: 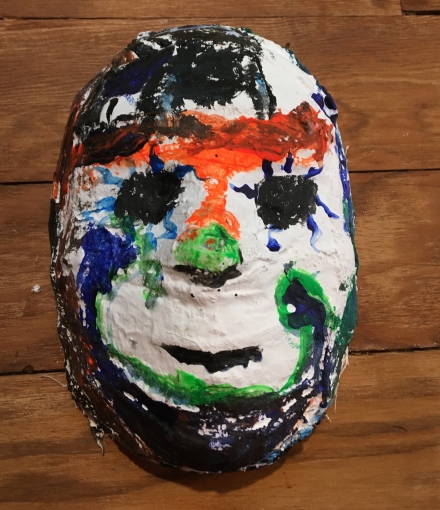 I succeeded in not crying when I saw it; I saved those tears for later. I probably didn’t do such a good job of hiding how startled I was. We didn’t talk about it much. She pointed out that there’s a dragon at the top, on the forehead. “I think about dragons. A lot.” She told me she had explained to the other kids that she’s “kind of goth,” so that’s why she chose dark colors. That’s about as far as she was willing to go with me.

Tonight she came home from Rogers and it had been a pretty tough evening. She kicked the back of Anthony’s seat in the car several times on the drive home, and she spit on him during exposures. I was angry and depressed by that, and I gave her the what-for, including saying unnecessarily and cruelly that maybe she’s not ready to go on vacation to see her grandparents, a highly valued trip to the ocean which is coming up asap. She didn’t rage at me, which surprised me a little. She was calm, almost blank, as she picked up her mask and pointed at the outside. “This is how I feel right now, Mommy.”

You would think I would have followed the lead and engaged in a conversation. But no. Instead I said, I don’t care how you feel right now. I care how you act, because that’s what we’re working on, that’s what matters.

Needless to say, not long afterwards I felt like a terrible, horrible, no good, very bad mom.

Technically, I’m right. Cognitive behavior therapy, CBT, is mostly about changing behavior. For little kids especially, the cognitive aspect of this work is secondary. We don’t waste much energy on understanding why; we focus instead on changing how the kid acts, one exposure at a time. When the behavior changes, that circle of connection and causation — thought, feeling, behavior, thought, feeling, behavior — will start to change the why.

But I’m also wrong, and I’m ashamed. Tonight, when Jesse opened the door to tell me what her mask is trying to say, I shoved it closed on her.

I’m not sure why. Maybe I’m just worn out by a hellish year and almost two months of intensive therapy. Or maybe there’s a more hidden motivation. Maybe I’m not sure I can keep it together if Jesse puts into words the inchoate feelings her mask seems to express. I’m not sure I’m strong enough yet to be the unbending shoulder she needs to lean on as she faces those demons. They look awful. They look terrifying.They look so sad.

So I’ll just let this mask haunt me from the kitchen table for a while. Next time Jesse offers to open the door, I’ll try to let it open. She deserves that much.

Today was the last day of school for my kids. I’m so happy I could cry.

Hold on a minute. Just waiting for the tears to come.

Jesse had the worst year ever.  it was undoubtedly a terrible horrible no good very bad school year. She didn’t even get to enjoy the simple pleasure of a half-day to close out the year — because every day of 4th grade has been a half day for her.

When I picked Jesse up today, I also had to carry out two heavy boxes of her therapeutic materials. My biceps almost failed on the walk to the car. It was an apt reminder of how burdensome and challenging this year has been for our family. But we never gave up by pulling Jesse from school entirely, so I guess that’s something.

I know I know, I’m channeling my Debbie Downer these days. Believe me, I’m well aware of it. I’ve lost my grumpy! How did it happen? How did I move from energetically grumpy to morose and self-pitying?  I need to find my way back to grumpy.

I can’t believe I just said that. I’ve finally found a feeling worse than grumpy.

Right, what? Oh, Jesse. Not only did she have a shitty school year, but she didn’t even get to enjoy a school-just-ended afternoon by settling down in a catatonic haze to enjoy marshmallows, ice cream, microwave taquitos, and a Sponge Bob marathon. Instead, it was right back to Rogers for another afternoon of therapy.

Jesse is so exhausted from all this therapy. After working super hard to control herself at school in the mornings, she’s been passing out on the long drive to Rogers. It’s pretty cute. 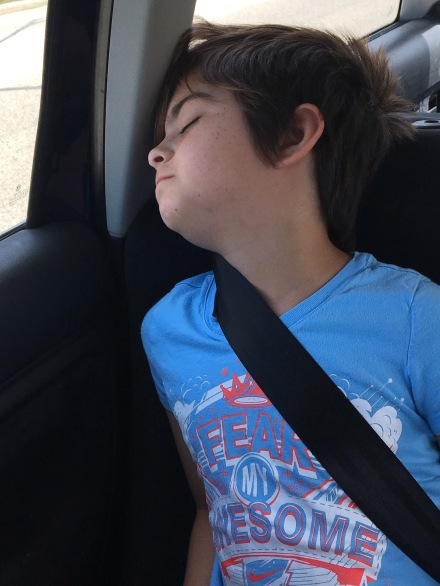 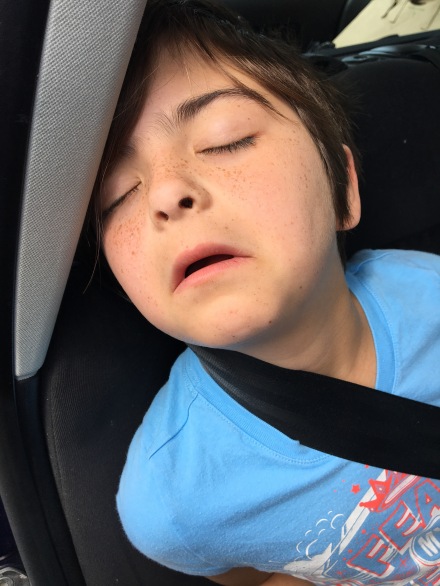 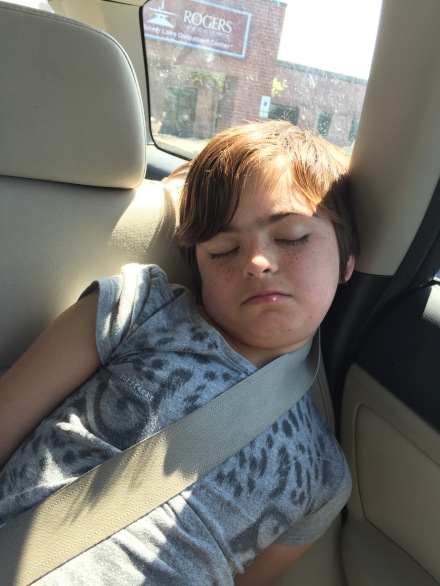 So this afternoon, instead of chilling out post-4th-grade, off we drove to Oconomowoc. I woke Jesse when we arrived, and in we marched to therapy. I displayed to her 3 x 5 cards on which I’ve carefully printed a variety of taboo words like 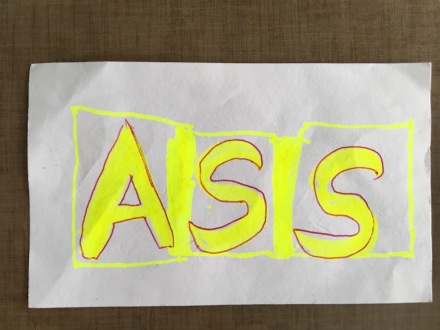 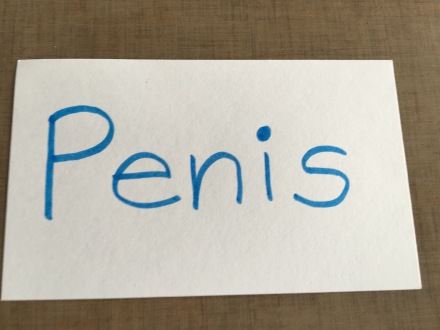 and invited her to resist really hard the urge to blurt those words.

Nick, by contrast, had a spectacular year in kindergarten. He went through periods of shyness and he lacks academic self confidence, but he’s enthusiastic, cheerful, and hard-working (for a six-year-old). Plus he has fun with other kids. I can’t exaggerate how much of a relief this is, after Jesse’s rocky road through her wee years.

Nick’s teacher says he is definitely ready for first grade. But I will admit: I don’t know what that means.

Nick wrote this two-sided poem-like thing for Anthony a couple days ago: 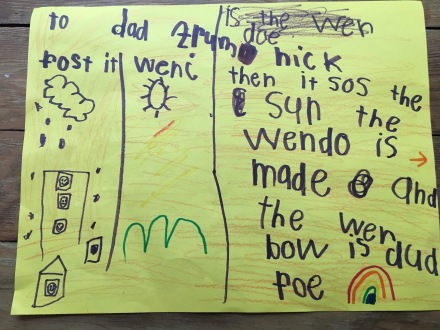 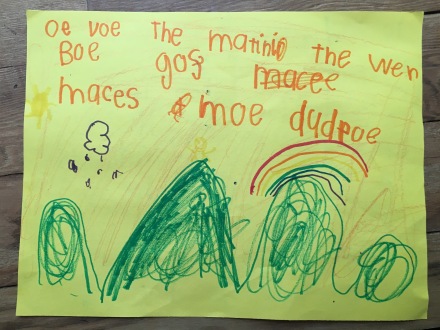 If you happen to be having difficulty reading that for some reason, like if your adult intellect has been compromised by normal spelling and American English speech patterns, allow me to explain and interpret.

In kindergarten, it’s all about phonemic spelling these days. Learn letter sounds, and then spell it like you say it. Nick is quite good at it. I’ll adjust a little on the letters to fix the reversals and mistakes; you just say what you read below, out loud, to sound like Nick:

I hope that makes things clearer.

Meanwhile, I am to conclude that Nick is ready for first grade. Huh.

That rainbow mountain poem will go up on our free art wall, which joins the kitchen area to the mudroom. 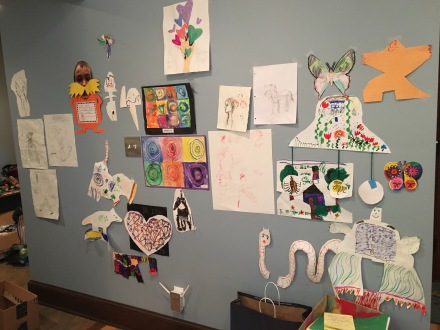 I fancied fine art, made by local artists, in this beautiful open space. I came close. Our cracked post-renovation budget led me to hand a roll of scotch tape to the kids instead of browsing at local galleries. So… The artists are definitely extremely local, and then just replace “ine” with “ree” after the F.

I admit though, I do like the child-populated art wall. The only troubling piece is this demented take on the Lorax: 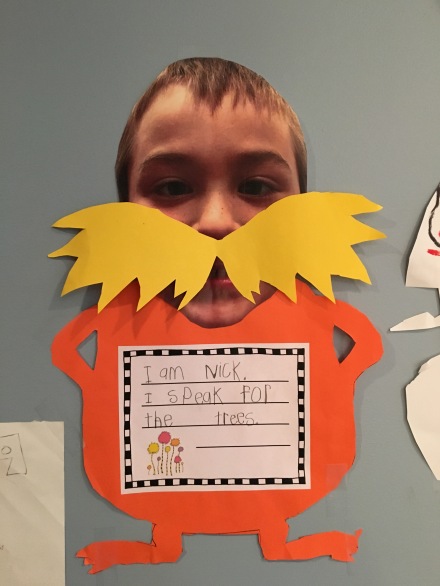 That photo of Nick is larger than life-size, and what is with his bony forehead? I get the creeps when I walk too close to it.

And I surmise that this is the kind of activity they do in kindergarten to get ready for first grade.

Huh. Maybe Nick actually is ready. He certainly makes a formidable-looking advocate for the trees.

And of course, I went through the traditional parental entropy that accompanies the final weeks of school. Twice in the past week I simply forgot to make Nick’s lunch. Today, I offered him puffed Cheetos as his snack — a last-day-of-school treat, how awesome am I?

Nick actually balked, insisting on something more healthy. And I actually replied, “I’m not doing it. If you want a healthy snack, ask your dad.”

Anthony rummaged deep in high cupboards, well above my line of sight, and pulled a clif “Z bar” out of the kitchen’s apparent anus. I don’t even know what a Z bar is. Where did it come from, and when? My kids hate packaged bars. We didn’t deign to check for an expiration date. Anthony held it up on display, announcing in a firm and grim voice, “this is healthier.” He shoved it in Nick’s backpack without further ado.

Then I promised Nick that, when I picked him up after school, I would bring his Kylo Ren light saber and a picnic lunch so he could play with friends on the playground. He’s wanted me to bring his light saber after school time and again all year, and I’ve never gotten around to it. I was determined to do right by him today.

As it turned out, I didn’t have much of a picnic in me. I filled a water bottle and grabbed that blessed bag of cheese puffs. Done. In a final fail, I forgot the light saber on my way out the door.

I’m still an awesome mom, because first I pretended I didn’t forget it, and then I pretended it didn’t matter (it did), and then I ignored Nick’s nattering and told him to go play. He’s an easy-going kid, so he swallowed his disappointment and seems to have forgiven me. I suffered no negative consequences at all for screwing this up for him. Hurray for me!

Now I can’t wait to spend a long summer with the kids, letting them down one way or another, hour after hour, day after day, and hoping to get away with it. Wish me luck.