When we first joined a CSA (farm share organization) three years ago, there was a tremendous summer drought. Our CSA, Wellspring, didn’t have a lot of irrigation capacity then, so some boxes were sparse — still delicious and eye opening, but slim pickings. I contributed half of my labor hours that year on a green bean picking day. They were such sad plants, despite the passionate farmer’s best efforts. I hunted and picked for 3 hours up and down rows of bean plants, and I only harvested about a brown paper bag’s worth of beans, most no bigger than a mid-size earthworm. That week each member got about 20 tiny green beans, enough for me to hold in one fist. It was hardly worth the backache.

This year I have green beans coming out my ass from just 2 weeks of Wellspring boxes. I could fill 3 gallon-size ziplocks, right up to the zipper. I scratched my head this afternoon. What to do with all these green beans? I do try to use our farmshare boxes fully. It seems a shame to buy something I’d prefer from the grocery store, when I’ve already paid for the box. But this is a lot of green beans. It’s as bad as growing zucchini. What do people do with all this green bean action?

Then I had the “ding dong” epiphany: HENCE GREEN BEAN CASSEROLE. Until today, I’ve considered this to be one of the more revolting food concoctions, involving canned green beans and canned tomatoes, and maybe a can of cream-of-something soup. Why would anyone do that to a delicious vegetable that you can steam and color up nicely with just a bit of vinegar and sesame, or maybe lemon and pepper? It’s a perfect lickety-split vege.

But I saw the light. I needed to make a casserole to unload these beans; that would use up tons of them. Five minutes was my limit for recipe-surfing. I found nothing tempting, except the idea of doing something akin to a gratin. I ended up making a green bean casserole that was incredibly delicious, despite appearances. The bechemel was made with yogurt. How cool is that? 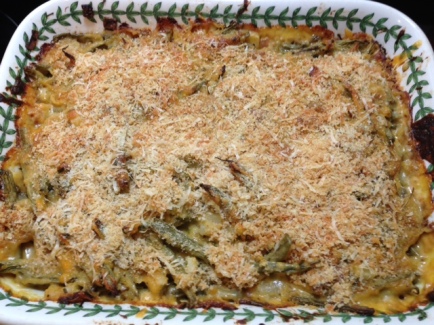 We supplemented it with some fixings — crumbled Italian sausage (sun-dried tomatoes and basil), avocado, and heirloom tomatoes. Better looking, and now a pretty complete meal that was second-helping-worthy (or in Anthony’s case, seconds-and-lick-the-plate-worthy): 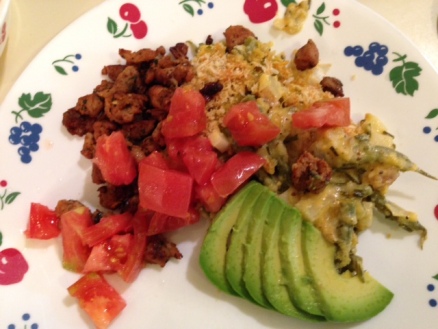 Unfortunately, I’m not sure I’ll ever be able to replicate this business. But for posterity, here’s my best guess recipe and how-to, in case you have an uncontrollable desire to make a green bean casserole and you’re out of ideas:

Chop an onion (farmshare!) and some uncured fresh garlic (farmshare!) and saute them in olive oil. Salt and pepper. After a little while, leave them be on low heat, and meanwhile clean up mounds and mounds of green beans. Cut them in half and dump them in a buttered casserole dish. Fill it up.

Tell your child for the 80th time today that you will not re-install the fighting game on his iPad. Take deep breaths and try not to burn or cut yourself on anything.

Tell your son that you still can’t play with him.

Grab the quart of plain yogurt, because you’re out of milk. Spoon a bunch of that into the roux. Whisk away and wonder if you’ve used enough, and then add some more. Maybe half the tub or thereabouts. Whisk and whisk. Watch it get thinner as it warms, and have mild feelings of anxiety about whether this is all a waste of time and will turn out to be totally disgusting.

Watch with satisfaction as the sauce thickens again after a few minutes. Wonder what to do for the next few minutes while it simmers and thickens some more. Aha. Dump the bowl of onions and chives and oregano over the green beans and moosh it all together. Suggest a potato to your husband. Accept the potato he selects and dice it into very small pieces. Throw that in with the green beans.

Work your way around your husband as he tries to put tacos together for the kids, who will hate the casserole even though the smell of its components is making them act like rabid, starving, evil Tolkien creatures.

Grate the large-ish piece of mild cheddar cheese you found in the fridge, but not all of it because we need some for the kids’ tacos. Check the sauce for thickness and decide it’s done. Throw in most of the grated cheese. Suddenly remember it needs to taste like something, so add a teaspoon or two of ground pepper, a good big pinch of salt, a small pinch of cinnamon, and many shakes of Cholula hot sauce. Oh, also a spoonful of brown mustard, the kind with little bits in it. Stir that all up and then pour it over the green bean/onion/potato pile and stir it all together, then sprinkle the last of the grated cheese over the top. Put it in the 350-degree oven for what ends up being an hour and a bit.

Clean up a little and then realize you have time for a quick run to Trader Joes for milk, so that Nick will be able to have his cereal in the morning. Start to scheme during the drive.

Arrive at Trader Joes and decide to jazz up dinner a bit. Grab a bag of avocados, some raw sausages, Parmesan, and a bag of fine bread crumbs. Rush back home and grate some Parmesan, mix it with a big handful of bread crumbs, and toss that on top of the casserole, which still has half an hour to go. Squeeze the sausage meat out of the casings and cook it with some Cholula, breaking it up into bits. Chop some tomatoes and avocados.

For better or worse, this is how Anthony and I usually cook, which means sometimes the food is really spectacular, and sometimes it’s spectacularly bad, but at least it’s never the same twice.

Unauthorized use and/or duplication of any grumpy for no reason material, without express and written permission from this blog’s author and/or owner, is strictly prohibited. Excerpts and links may be used, provided that full and clear credit is given to grumpy for no reason with appropriate and specific direction to the original content.