Valentine’s Day is a pain in my ass. The kids have to take Valentine’s cards to school for each of their classmates, and historically it’s just been a messy and painful proposition in my world. What a shameful waste of resources in a resource-depleted world. Can’t a class full of kids just all stand in a circle and hug each other? I bet that would do more for them than a mess of cards with illegible handwriting.

But this year Nick is old enough to participate in making his cards, and Jesse is sometimes Little Miss Pulled-Together, so I felt less apprehensive as I stepped into the Valentine cycle. I got materials together for cards — card stock, heart doilies, ribbon, some stickers, tiny cupcake papers which we mashed out and pasted onto the cards, organic lollipops. I felt so Martha Stewart. Both kids were home sick today, and everything was laid out on the dining table, so we got down to business this morning. And in one of those magical interludes that sometimes happens in a life, Jesse, Nick and I spent a FULL HOUR peacefully making Valentines. No fighting. No whining.

Frankly, it was bizarre.

Nick’s K4 teacher sent home sheets with little photos of each of his wee mates, so we cut those out and glued one onto each card. Nick took a look through the pictures and focused on one kid. He shook his head disapprovingly. “That dude behaves real bad in class, mommy.”

“You still have to make a Valentine card for him.”

“Because it’s the right thing to do. You can’t leave him out.”

Nick looked at me sidelong. I was making no sense to him. Jesse stepped in with the profound wisdom of a kindly nine-year-old who’s spent a LOT of time in therapy, and who remembers well how her own strange behaviors alienated her as a wee lass. She spoke in a blunt, matter-of-fact tone. “Nick. Sometimes when a kid is acting bad in class, he just needs someone to say, ‘do you want to play with me? I think you’re nice. I like you. I’ll be your friend.'”

She paused in her card-making to look at Nick for a second. “You should do that.”

My corporeal form disappeared and I melted into a soulful puddle on the floor. No no no, that’s not right. My body felt like it was filling with a joyful anthem, somewhere beyond the words and music of this world. It blared inside me like Gandalf’s staff set alight, healing the dark and grumpy and cynical corners of my being for a moment.

Then I thought things like, wow. Jesse’s pretty amazing. It’s like stardust is glittering out her eyes, and rainbows are coming out her ass. Which isn’t as obnoxious as it sounds. I was just feeling a little overwhelmed, and I didn’t think the kids would understand why I was crying, and thinking something silly like that made me laugh a little instead of tearing up.

Right. So Nick was sold. He went ahead and made a card for his bad little mate. A few minutes later, Jesse looked down the list of her classmates and spied “Amy.” (pseudonym, right?) Amy isn’t very nice to Jesse. Amy tries to put Jesse down in art class and seems to make fun of her a lot. Jesse tolerates it and pushes back well, but she is not fond of Amy. She didn’t want to give Amy a Valentine’s card.

I reminded her of what she had just told Nick. Jesse jumped on it without hesitation. “You’re right, Mommy!” She pondered for a moment as she rummaged on the table. “I heard her talking with Mrs. Gember a while ago and I heard Mrs. Gember say, ‘your family is going through a lot right now.'”

Why does my Jesse hear and remember all these things? 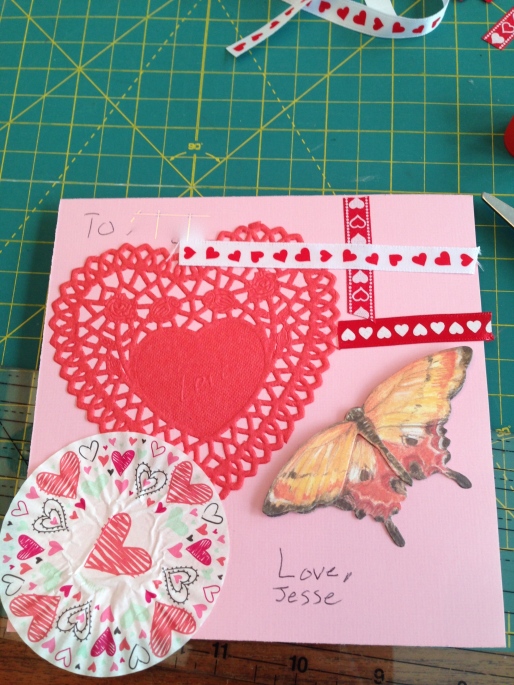 Not bad. I like the composition. I suggested Jesse not say anything she didn’t mean — no reason to be fake. She could just say “from Jesse.” But she chose love. Her gift to her own self-worth was not to write a special message to Amy. She nodded confidently as she made that decision.

For other friends, Jesse wrote very personal messages, one-liners. To a buddy who worked hard on a backflip off the balance beam in gym: “You do awesome backflips.” To a friend who’s shy about her freckles: “You have such beautiful freckles.” To a  friend who’s obsessed with a hat: “I love the meow hat that you wear.” To a friend who gets her in trouble for laughing in class: “I like it when you bother me.”

Then there were the ones that were strangely sad in their honesty. To a boy who used to run and play wildly with her in first grade: “I remember when we used to race together.” To a girl who was a dear friend in kindergarten and first grade: “Me and you loved to play together.” These are kids Jesse has lost touch with, hasn’t connected with this year. Should a nine-year-old be feeling nostalgia and longing? Maybe Jesse understands love better than a lot of adults.

Jesse secretly made a card for us as well. We didn’t wait for Valentine’s Day to read it:

I think this little girl may heal me yet.