It’s been 21 days since I posted up a blog. I’ve been busy with other shit, as you may have guessed if you read my last couple posts. Anthony and I have been ripping out old wall-to-wall carpet in a room, and we sanded the floor and refinished it.

It looks pretty good. Here’s  the progression. What it looked like right after we lifted the carpet: 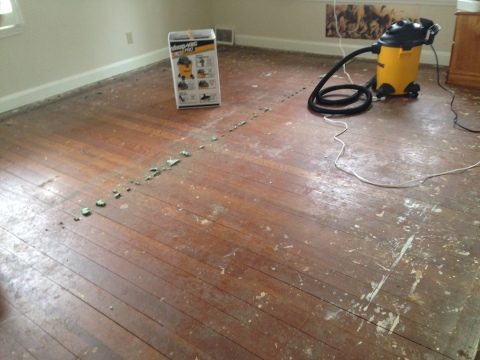 Then after we sanded (with a 130-pound buff sander so unhinged that managing it was like dragging an unbalanced washing machine around the room): 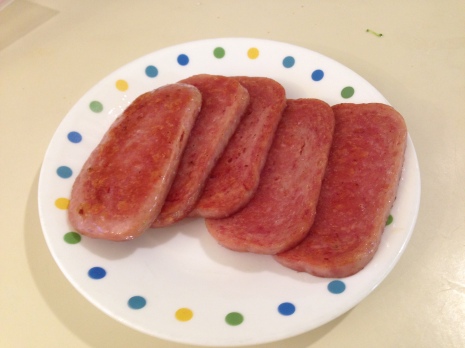 Oh. Wait. That’s the Spam I fried for Jesse that day. Hold on while I find the right photo.

Okay, here’s what it looked like after the first coat of varnish: 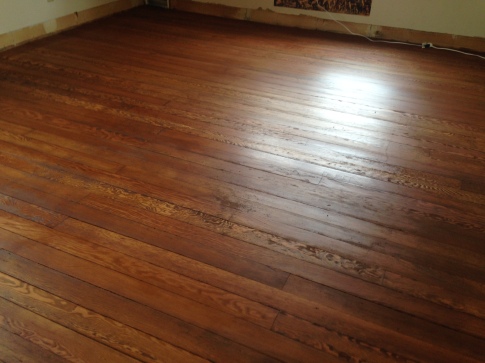 And after two more coats:

Anyway, there’s been other stuff to do as well the past several weeks, like feeding minions and trying to remember to have them bathe at least once a week. Also school lunches. Also tae kwon do shit. Also finishing pants and shorts that I’m sewing for Jesse and Nick. Also sitting on the sofa slothfully in a mild depression, staring blankly at dust bunnies floating in the sun, which I have to do every day for a little while after I take Nick to school.

Because Jesse has had a few ba-a-a-a-ad weeks and Nick is in the midst of a five-year-old’s equivalent of a mid-life crisis.

So it got under my skin when I saw that there were two new comments today on my most recent blog post and this is what they said:

“Really how long do you expect me to wait for your witty and emotionally draning [sic] commentary?” (Anonymous)

I don’t get a lot of comment action on my blog because WordPress’s default is to require commenters to leave their email address and I haven’t figured out yet how to change it. Who has time for that shit? So most of the comments I get are like these — slightly off-kilter, weird things written by what I assume is some sort of translator spam machine, along the lines of “thank you for your insightful insights into the operations of things. I am look forward to reading much more helpful and useful iterations of your creativity.”

Still, it got under my skin. I read the comments and shook my head, thinking, “Listen, joker, it’s not my commentary that’s emotionally draining, it’s my LIFE.”

Nick is totally out of control right now. He’s going through the terrible twos, three years late. (My kids are late bloomers.) He screams frequently and at random moments, throws tantrums and hard toys at me, doesn’t do anything I ask, refuses to share anything with Jesse, beats her up and follows her around the house attacking her with imaginary weapons and then falls into bawling tears when she pokes him with a feather. He’s driving all of us crazy.

But who is Jesse to judge? She’s been throwing her own tantrums, and she’s turning 10 next week. It’s been day after day of horrifying, emotionally numbing outbursts and melt-downs. She’s a tornado when she gets like this, hurling random insults at others and herself, making threats to hurt others and herself, and unable to gather the reins in.

But who am I to judge? I’ve been following Jesse and Nick down the path of crazies. Instead of offering useful, mature parental guidance, I’ve been yelling at the kids every day for all their fighting and insanity. After nearly a decade, I still have limited reserves for dealing with Jesse when she detours into emotional oblivion. And Nick hurts too because I don’t have any reserves left for him. His sister uses them all up. I can’t tolerate his normal five-year-old shit with any equanimity lately. So I yell, I stomp and have hissy fits, and I complain about everything. I hate myself.

Rationally I know there are lots of reasons why Jesse’s negative behavior, which is rooted in her anxiety and self-loathing, is ratcheting up a million notches. Our house is a wreck because of the carpet ripping and floor refinishing; shit is in all the wrong places. We’re trying to get an even bigger renovation project going as well, and this is making Jesse feel very unsettled. Badger tests are next week. These standardized state-wide tests have no meaning to Jesse in terms of her development and potential, but they sure matter to public schools and their teachers, who make a big deal out of them. I keep telling Jesse they don’t matter, but she’s not buying my line; she’s totally stressed out about the testing. Last week we competed in tae kwon do tournaments, and Jesse (and I) sparred for the first time without adequate preparation. Major stressor. Next week is testing to advance to the next belt. Jesse’s birthday is next week, and for some reason she has a lot of anxiety about her birthdays. I think she’s expecting some sort of transmogrification to occur. “I’m ten today, Mommy! Look, I have wings now!” Or maybe she’s wishing, and preparing herself for the emptiness of another ordinary day. A teacher told her class that if it doesn’t rain soon, California is going to run out of water. She came home filled with trepidation about what’s going to happen to Grandma and Uncle Mark and Uncle Ted. Will they have water to drink?

So I get it. I understand why Jesse is emotionally in the red zone. But knowing that with my brain doesn’t make it any easier for my body and emotions to cope. Because Jesse is a terror when she gets like this, and our family is coming unhinged.

This morning Jesse woke up and started right in. She came to my bed and head butted me on the nose. When I told her to go back to her own room, the whining, ululating, and rage bursts started. Before I even made it to the bathroom to pee she had thrown her first real punches at me and screamed at me about (a) what an awful parent I am, and (b) what an awful child she is. She hit a clean emotional blow when she screeched that all I’ve been doing is yelling and screaming at her every day.

“Huh,” I thought to myself as I brushed my teeth. “That’s pretty accurate.” I made myself a promise, one I’ve made hundreds and hundreds of times before. I didn’t yell.

Eventually Jesse made it downstairs in a quieter mood, but instead of coming to breakfast she decided first she needed to finish her homework. I asked her to eat breakfast first, but she settled into her work instead with weird humming and moaning noises, which continued helplessly as Anthony tried to say good bye to her.

I dug deep and kept trying not to yell at the kids as the morning progressed. I snapped to be sure, but I didn’t descend into the crazies. I sent Jesse to her room a couple times for screaming insanely and picking on Nick. I ignored her best I could. And after she cleared her plates from breakfast (assisted by some snapping from me because she was definitely going to break something with all the slamming going on), she disappeared for a good long while.

After washing dishes and pouring another cup of coffee, I settled on the sofa and stared glumly out the window into the spectacularly beautiful woods in our back yard. Nick, who was in pacifist mode, played quietly by himself. A few minutes passed, and then Jesse came tip-toeing down the stairs, dressed and ready for school. She settled silently onto my lap for a snuggle, without a word. There we sat, an emotionally broken woman and her equally lost daughter, holding each other like lifelines. I continued to stare out the window, preparing myself for whatever Jesse might throw at me. But all she threw was a glance up at my face. I could tell out of my peripheral vision that there were question marks and longing in it.

So we sat a moment, and then Nick came over and snuggled in. And there we sat in silence, Jesse on my lap with her head on my left shoulder, and Nick pushed in against me with my right arm wrapped around his still-tiny body.

So we sat a moment, and then our diminutive dog came down the stairs and joined us. Madeline sat her fluffy six-pound self down on my tummy, and still we sat quietly, enjoying our mutual company in silence. Love blossomed up around us. In that moment, it was enough to crowd out those awful weeds of anxiety and self-loathing, the stupid bickering and fighting that inevitably accompany a life shared in minutiae.

If you saw us then, you would have said we were a picture-book family, a vision of joy and happiness. (Unless you had seen us about 45 minutes earlier as well. Whatever.)

So an ordinary day passed, and many good things happened. Anthony decided to come home early to be with Nick while I worked out. I realized later that he was just being excessively nice to me because he gets it — the kids have flayed me. After I picked the kids up from school, I dropped Nick off with Anthony and headed to the gym. Jesse’s swim team worked for an hour and a half and I worked out too. Jesse wanted to have dinner with just me at a park, so we picked up some carry-out and did that, enjoying a quiet meal under some trees without the noisome energy of Nick drowning us. I could tell Jesse was just trying to reconnect with me, trying to show me she deserves my love. I realized I was doing the same thing. It was all good, and we didn’t have to debrief any of the big issues that haunt us.

We got home and the peacefulness continued, except we saw that slightly depraved look in Anthony’s eyes that told us he had been alone with Nick for more than three hours. As we snuggled down in bed to watch an episode of Odd Squad, Anthony spoke out of the blue, with a sly smile on his face. “So Carla… Did you like my comments on your blog today?”