It’s my brother Eric’s birthday today. He’s three years older than me, but at this middle-aged point in our lives we’re practically the same age. I’ve always called Eric my “little brother”, as in, my littlest big brother, but I guess once you’re a big brother, you’re a big brother no matter how old everyone gets. Even if you started out a little cutie like this. 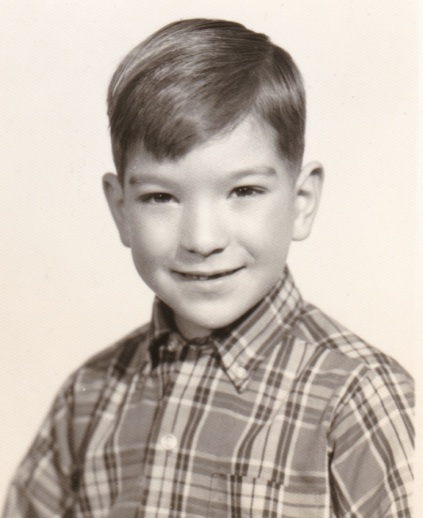 Eric’s the one in the middle in the feast shot, with our brothers Mark to his left and Ted to his right. That’s mom with the beehive. I don’t exist yet, because this was Eric’s one-year celebration, Korean style.

Here’s Eric with his lifelong best friend, brother Mark, who’s 14 months older than him. Eric’s on the right. 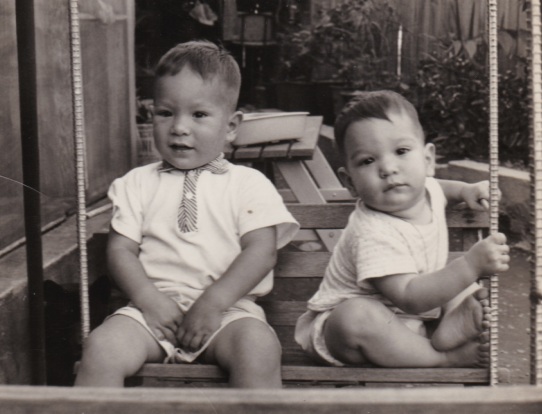 They look like characters in a Maurice Sendak book.

I hesitate to write the rest of this post, but sometimes the heart needs to speak. Eric may well get a bit miffed at me for this, but I’ll just go ahead and say it: he is a first-class keeper of the grumpy flame. There’s a reason we sometimes mocked him with the nickname Mr. Sunshine, alongside my grumpy dad. But don’t think for a second that I’m judging. It’s been some long years since I accepted my place on the list of flame keepers and recognized that Eric and I share a lot of grumpy DNA.

These days I wonder a lot about whether the relationships we remember with our siblings are reality-based or rather figments of the apocryphal stories we’re told over and over again by our parents and other observers. I thought for many years that I grew up in a constant state of conflict with Eric. As a teenager, he was pretty damn hostile and angry a lot of the time, but it wasn’t really that. There were the stories. I heard again and again about how he wouldn’t share his GI Joes with me at Christmas when I was three, so I punched him in the face and gave him a bloody nose, and then there was the time I bit him so hard he bled after he was mean to me. Ha ha ha what a great indicator of our relationship. There were always stories about us fighting and about Eric picking on me. I don’t remember anyone ever telling me stories about stuff we did together that was fun, about the love we shared as siblings.

When Eric went through some tough times in high school, no one invited me to be compassionate, patient, or accepting. My parents didn’t play parenthood that way. They yelled, they threatened, but they didn’t listen or sympathize readily. No one explained to me that Eric’s rage probably wasn’t about me but about something else, something hurting inside him. No one asked me to be bigger than a spoiled little sister. So that’s how Eric saw me, if I have this right. He called me spoiled, bitchy, stuck up, and much worse than that. He would even say, “Mom always loved you best.”

I always hated hearing that last bit. I still remember a particular occasion when that blurted out, when we were nearly adults. It reflected so much insecurity and sadness, and it wasn’t true. I felt terrible for Eric that he felt that way. But I didn’t have any magic moves in my emotional skill set to fill his cup in that moment. They didn’t come instinctively to me, and my parents didn’t teach them to me. My heart told me he needed to hear that he was loved, without any anger attached to it, but I couldn’t find my way there. I just kept yelling back at him.

When I root around in my memories of Eric, without the filters of other people’s stories, I find a lot of good stuff. We played together, we ate together, we watched TV and shared games. Of course we fought, but that’s normal. And Eric supported me in a lot of ways, like any decent and excellent brother. He helped me with homework; he cooked food and treats for me; he played games with me; he defended me; he posed for awful photos with me. 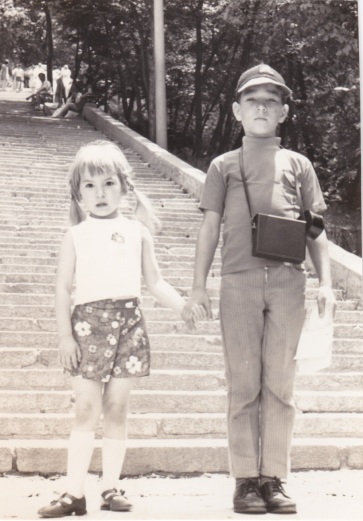 What more can you ask of a grumpy big brother than to tolerate a little sister with such a dopey look on her face?

Echoes of Eric’s insecurities haunt me to this day, because I always wish I had been more sensitive to them, in all the ease with which I passed through school and college. But never mind. Here and now, I’m laying it on the line with this birthday message to my brother:

Eric. You are and will always be my big brother. Just like our grumpy dad was an anchor that brought our family together, in his stead you’re becoming the anchor that brings our family together. Your grumpy is an important part of it, a reminder of a father who I adored and still miss so much. I love that you’re a devoted husband and father. I’ve seen you apologize to your family for your grumpy behavior. It’s not something our parents taught us to do; it’s BIG that you found the courage to go there. May you always own your grumpy more than your grumpy owns you. I’m working on it too. And no matter how flawed you are or I am, I love you, bro, and I’ll always be on your side. I wish I could have told you that a hundred times, decades ago, when you probably needed to hear it more.

One thought on “grumpy about brothers (happy birthday, Eric)”