We got home Friday evening. We pulled up with vague feelings of trepidation, because two weeks’ worth of labors have happened in our absence. From the outside, we saw immediately that the skeleton of the addition is done. Very very cool, and very very exciting. 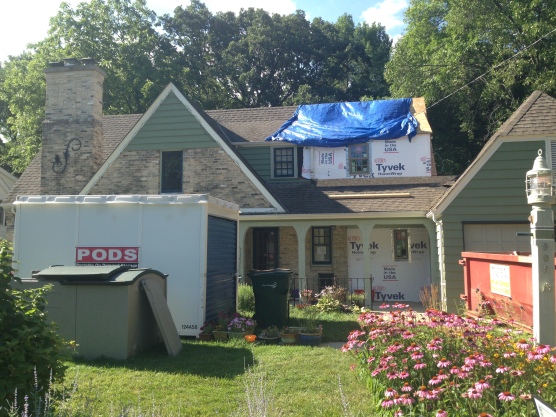 Then we walked into the house through the kitchen door.

The first thing I noticed was the ripe stench of raw sewage. It hit me like a hammer to the head. After I contained my gag reflex, I investigated. I discovered that our powder room toilet, which is right next to the kitchen door, was full of brown mucky water. Definitely sewage. The toilet in the second floor bathroom was the same. There’s no water running to those rooms, so it felt all wrong.  Also the towel rack over the upstairs toilet had fallen off. I have no idea why, since nothing has happened in that bathroom. Maybe the shaking from demolition on the other side of the wall? Hopefully it didn’t involve someone holding onto the towel rack while making sewage. 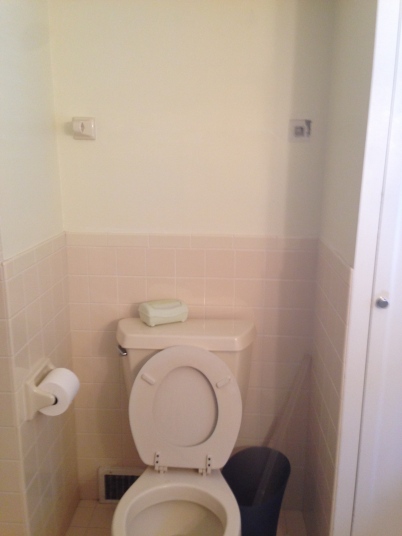 I wandered into the living room. The fish tank was murky. Verrrrry murky. There are three fish in there, but I can’t seem them. There used to be four. One died while we were away.

The basement laundry/bath room, the only place where we actually have running water — i.e., where we’ll piss, shit, shower, brush teeth, wash hands, do dishes, and get drinking water until some weeks from now — was completely filthy from mechanical work. I thought the laundry would be hooked up, but it wasn’t. My dreams of getting right to washing the 10-gallon ziplock bag full of vomit-covered clothing and beach towels, from yesterday’s drive, were dashed.

The carpet in our basement, in the zones around the mechanical work, was scary dirty.

The refrigerator was off for three or four days while we were away, so there was no cold food. Everything had to go. Also we had no other food worth mentioning.

Our gigantic window fan, which usually draws a massive amount of air into the house via a window in the middle room, wouldn’t cool down our haven bedroom. We slowly figured out it’s because there’s a giant hole in a wall where a window is supposed to go, and that’s where the fan is drawing in air instead of from our bedroom windows. The actual window can’t go in the gaping hole yet, because there’s a massive main-line electric wire bundle running out the hole. I’m sure it has something to do with the utility company being asshats.

And so on. But it’s cool. It’s groovy. It’s all good. Because this is what living in a home under renovation is like, right?

We eventually figured out that the vent stack for the house has been untethered, because it was all quirky and has to be redone with the new bathroom and all. Here’s the place where the vent stack used to head up:

And the top of it heading out the roof:

There’s a missing link, and the twain shall never meet again, at least for a while. If you don’t already know about vent stacks:  they’re really, really important. Those nasty gas bubbles that come up from raw sewage go up the vent instead of pushing sewage back up into your toilets. Once we saw that our vent stack had been dissected, we understood that gas bubbles had pushed sewage back up into our toilets. Easy solution: we carried buckets of water up from the basement and poured them into the toilets, and after a few pours it was all better. Fortunately, the drains were still in place. We forgot to check first. That would have been a disaster of unimaginable magnitude.

Our air conditioning still works, so we fixed the fan and heat problem by turning on the a/c. Easy-peasy.

Food deficit? Solved: Noodles and Company, and then Trader Joe’s. Each within six minutes of our house.

Filth? Solved: Anthony. He is a Type A machine when it comes to this stuff. Armed with a swiffer stick and a few boxes of swiffer wipes (wet and dry), along with a dustpan, he cleaned everything up. I vacuumed aimlessly in my poodle skirt and sweater set while he toiled.

Fish tank? Working on it. I scrubbed stuff and change the filter and changed out half the water. It’s recovering.

Laundry? Solved big time. I texted Kristi-the-designer to whine a bit about it. I wondered if the washer could be hooked up Monday. But the plumber came this morning (Saturday!) and fixed it up right away. His name is BOB. Bob the Plumber. Kristi refers to him affectionately as “Bob the P.” BTP totally came through for me.

I even remembered to call Time Warner before we got home. The cable line had been pulled off the telephone pole a couple weeks ago, right before we left on our vacation, so we had no internet connectivity. Talon, the demolition specialist, admitted he took the line down (unintentionally) with a mighty blow from his sledge hammer. I couldn’t blame him, because earlier in the day a visitor to my next door neighbor had rammed Talon’s car with her own and then tried to avoid reporting it to the police and insurance. Not. Talon had good reason for some aggression.

During our long and miserable drive home from New Jersey (where my in-laws did not eat me), I called Time Warner, and they came out before we got back home to fix our internet line. So when we got home, we actually had internet. We set the kids up for a quiet movie and all was well in the world (except for everything that wasn’t well).

And the new spaces in our house are starting to come together. It’s hard to capture in photos. but here are a couple looks.

You’re seeing our future new kitchen and mudroom there, from a couple different angles. Looks good.

Nothing seems to be irreparably broken, despite the removal of an entire wall of our house. Jesse might appear to be broken, but I’m not buying it. I just need to try a little harder and get a fresh perspective. We’ll survive this renovation because we have no choice anymore. I’ll survive Jesse for the same reason, just as surely as she’ll survive me.