We’ve moved on to the Tourette’s/tic clinic at Marquette University, to continue therapy for Jesse in a less intensive way than the 4-day-a-week Rogers program. We’re starting out working on some belly-breathing techniques, and also our lead therapist has suggested we put together behavior/reward charts to incentive Jesse to get with the program.

We’ve tried behavior charts (aka sticker charts) before and they haven’t helped. Because Jesse = too much pressure. The ordinary course of events is as follows:

Jesse looks at the behavior chart and immediately feels anxious about the number of different ways she can earn points, even if the list has just two items. Too much pressure.

Jesse becomes obsessed with how many points she has earned and argumentative about the metrics. Too much pressure.

Jesse becomes upset when she doesn’t successfully accomplish a goal that would earn her points. Too much pressure.

Jesse ends up feeling even more terrible about herself after deciding she can’t earn enough points to get prizes, even as she earns prizes. Too much pressure.

Jesse feels so terrible about herself as a result of the point chart that she decides she doesn’t deserve any prizes ever, even if she’s earned enough points to get them. Too much pressure.

Jesse feels utterly disappointed about the prizes she earns. All the pressure has taken away the savor of success.

But I’m nothing if not persistent, and I’ll take expert advice openly most of the time. Marquette says give it another try, so I’ll give it another try. After procrastinating for three days, I finally opened Excel and got to work making point charts.

(Relax about the weird formatting, I’m too lazy to do anything other than a screen grab today.)

AndI had to do a chart for Nick as well or he’d have an understandable and well-justified hissy fit: 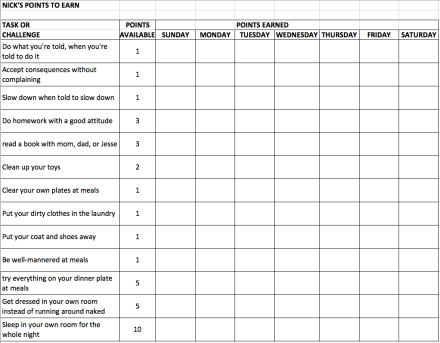 Then there’s the reward chart: 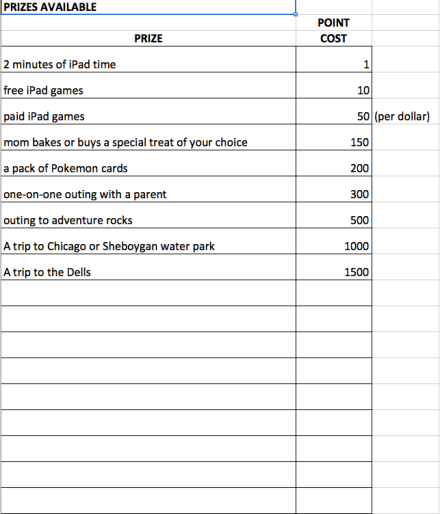 The idea is to create a win-win situation if you can get the child to commit. Even if they’re doing badly on any given day, I can simply create opportunities for them to earn points and feel better about themselves. The prizes include a range of short-term and long-term options, so they can spend some points immediately and save some (or all) points up for larger prizes. This helps develop some concept of delayed gratification, which I imagine is important for someone with massive impulse control issues like Jesse.

It took quality time to put these charts together. I thought hard about point structures — how many points should an imperfect child be able to earn in a day, and how quickly do I want that to translate into particular prizes? I had to dig deep in my mommy brain to work this stuff out. And I get bonus points for the genius move of adding a massive-point-earning item for sleeping in your own room all night. Anthony and I are really rooting for that to take hold.

It’s a pain to do this, but I feel good about it for now. I don’t want to be bragadocious, but these charts are good, they’re the best charts you’ll ever see, they’re fantastic and they’re gonna work, because I’m an expert on behavior charts, I’ve been using them for years. The universal failures in our past efforts with behavior charts just prove how great I am at behavior charts, because my kids are still alive, and doesn’t that make me the best mom ever? The best.

I presented the charts to the kids yesterday. Nick immediately began to harangue me about how he could earn points, whipping himself into a frenzy of doing homework, reading books, and picking up toys. It was overwhelming. I had to direct his attention to critical item #3: “Slow down when you’re told to slow down.” Throughout the day, he did just that, for at least 30 seconds at a time, taking deep breaths and dramatically Being Still, in my face. Maybe I should have added a separate item, “Get out of mommy’s personal space when she tells you to.”

Jesse feigned indifference to her chart. I understood perfectly. She’s been down this road before. It has led to nothing but emotional bankruptcy. But she didn’t argue about it or reject it outright. I explained that it’s as much for Daddy and me as it is for the kids: our therapist is pointing out anew that we have to focus on effort, not success, and find what’s positive in each day. It’s the persistent problem of parenting challenging kids: you can get stuck on all the negatives, and you forget that there’s a whole lot of good stuff that happens on any given day.

So I rah-rah’ed the charts to Jesse. We’re going to stick to what’s positive. No down side. No losing points, no negatives on these charts. Only wins are recorded.

She went upstairs and took a nap.

Jesse had a hissy fit just before dinner, I don’t remember about what. The what doesn’t matter. We’re learning that raging episodes are common with people who suffer from Tourette’s. No one is entirely sure why, what the mechanism is in the brain or whatever. But it makes sense to me, that when your head is full of bewildering obsessions and offensive behaviors you might tend to get just a little angry. Jesse can pitch an unexpected and sudden fit about anything these days, from the feel of a grass stain on her toe to an imagined spot of strawberry jam in her hair, from the sunny weather outside to the question of whether Donald Trump will destroy the world if he’s elected president. Her rage blows up and, as long as we don’t fan it, eventually dissipates on its own like a noisy local thunderstorm cell.

Anyway,  Jesse had a raging episode and I sent her to her room. She quieted down on her own and came down later to join us at dinner. We tried to keep it positive. I reminded her that by going upstairs when I told her to, she earned a point on her chart. Anthony rah-rah’ed as well. But still she started whining and complaining about something, so I reminded her that if she used good manners during dinner, she’d get another  point.

Then Jesse started talking more assertively, in frustration and anger, about negative numbers. Her words were jumbled, incoherent at first, almost as inchoate as they were important to her. Anthony and I compared notes later and we had each received a slightly different message, but the paraphrased gist of it was this:

My heart ached as I listened to my little 11-year-old child trying to express these thoughts, such big thoughts for such a little thing. There was so much sadness and frustration behind her eyes. There is so much imagined, preemptive failure lurking in the pits of her soul, waiting for the right moment to well up and crush her. Anthony and I can’t reach in there deep enough to wash it out for her.

But also there was that hint of self-advocacy, which I was well-pleased to hear. Her open communication created an opportunity for Anthony and me to stress the sweet nothings even neurotypical kids need to hear once in a while:  you are a good person; we know you’re trying as hard as you can; you deserve to be rewarded; you deserve good things; don’t beat yourself up; don’t give up. And also for good measure… Let’s try the behavior chart, I think it’ll help. (I tried to hide my skepticism.)

How does a person overcome a birthright of so much self-loathing? How do you find the right medication to aid in that journey?  How much self-talk does it take to re-shape a self-image that’s so broken? And how many behavior charts does it take to lift up a broken heart?

No idea, but here we go with the hash marks. Yay.