I’m on day two of my month of gratitudes, and already I got nothin’.

Give me a second, it can’t be that hard.

Fine, I’ll just make something up:

Today I am grateful for this lovely fire I’ve got burning in the grate. 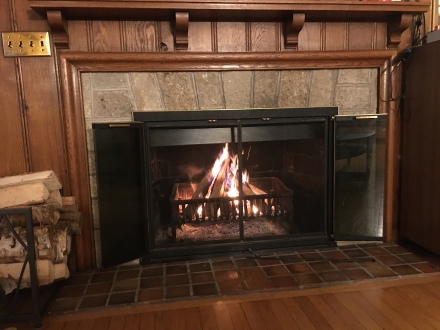 Around this time of year I typically order a face cord of mixed hardwood – I think I have that right, but I’m not sure. Face cord? Half face? Whatever – it’s a mix of oak and birch, so the birch bark makes our fires go like we’ve hit them with napalm.

I love a real fire, whether it’s in a fireplace or at a campsite. There’s nothing quite so toasty.

But these days it’s hard for me to feel good about burning wood. It makes me think of Brazil, and Australia, and California.  I recently heard a report that 80% of wild koala habitat has gone up in smoke in Australia, with burns reaching something like 2.8 million acres.  I struggled with that number. I had to google it to make sure it was real.  It was.  Scientists think koalas may be facing practical extinction because of lost habitat from the wildfires.

I read a thing today about the ice sheet in Greenland weeping waterfalls as it cracks apart, with worries about accelerated rising seas.  I think it was in Greenland.  But does it really matter? Does it matter that our world is burning and preparing to drown from rising seas all at the same time? Does it matter if we’re not going to do anything about it? All the religious nuts think this is a sign of the second coming, and not a sign that humans are selfish, greedy creatures destroying everything we touch.  Does it count as a “sign” of an apocalyptic religious event, if you make the sign happen yourself?  Not in my book, but surely in a charlatan’s.

Jesse and I chatted as we drove  home from school a few days ago, about the situation with the koalas.  She was thoughtful as she stared out the window. “It just makes me feel so hopeless,” she said quietly.

I was struck by the strange sadness of a 14 year old girl speaking like this about the world. She sees that our president and one of our two major political parties doesn’t believe in climate change and isn’t going to support any effort to respond to it.  She sees that adults aren’t changing.  She’s not alone.

But we chattered away.  I had no choice but to say what I said to her, as a parent who bothered to bring children into this world, knowing what they may face in the years ahead.  I said it’s never hopeless.  Humans are adaptable.  We suck, but we’re also capable of great things. Humans cared enough to bring species back from the brink of extinction, like the peregrine and the bald eagle.

She interrupted me.  “Yeah, that was a long time ago. It’s not like that anymore.  No one cares.”

I argued on.  It will take courage, I insisted.  Your generation will have to find courage and strength. Dad and I are raising you to be anti-authoritarian for a reason – so you can think, and dream, and act for yourself, guided by your own moral compass, without reference to what the people with all the power insist you must do.  You might be the very person who saves the world.

Jesse rolled her eyes at me. Maybe I deserved it.

And well, with all that dreaming set aside, here I sit in front of a fire, spewing greenhouse gases out the bunghole of our chimney for the mere pleasure of my warmed feet; stewing in my hypocrisy and indolence; and wondering if I’ll live long enough to really despair for my children as it all falls apart.