One of the great joys of parenthood is hanging really awful art on the living room walls. When your four-year-old brings you a family portrait she’s worked hard on, you frame it and put it somewhere special, even if it looks like this: 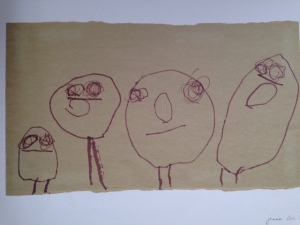 There are some elements that don’t make sense. Jesse’s and Anthony’s mouths are above their noses, and Nick doesn’t even have a nose. On the other hand, Jesse did draw Nick smaller than the rest of us; I have the biggest round head; and Anthony’s head is long and skinny. So I do think Jesse captured some essential aspect of our physical properties. Not bad.

At around the same age, this is what Nick was drawing: 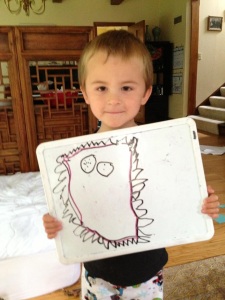 It was with great pride, which you can see all over his face, that he presented to me this “spiky angry bird,” which he slaved over. He’s got a thing for angry birds. I’ve got a thing for googly eyes, so it was a win win.

It’s really my own fault that the kids aren’t better with a stylus-like instrument. I’ve been told using scissors helps improve pencil grip strength, and early ed peeps have always urged me to let Jesse and Nick practice with scissors at home. But have you ever met my children? I don’t encourage them to use scissors in the house. Ever. They can catch up later on this fine motor skill, at school or some other place where they can’t use tiny cutting devices to trash things like my curtains, my clothing, and my life.

And anyway, if Nick had better pencil skills, he could never have drawn a cute animal like this at his nature preschool: 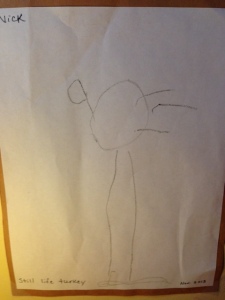 The teacher added a caption, “still life turkey.” Do you see it? I totally do. It’s a long-legged turkey, native to Wisconsin of course.

Jesse and Nick painted a couple canvases last weekend with the babysitter, while Anthony and I were having a playdate at a local bar. 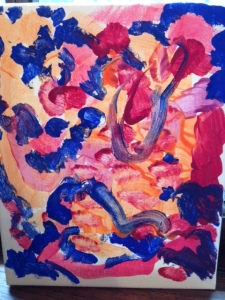 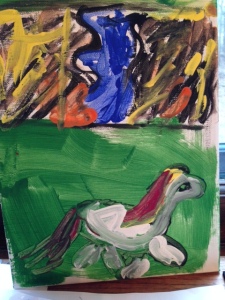 I have no idea what Nick’s abstract piece is showing us, but I was told he was making footprints or something like that. I like the colors and brush strokes. To my mommy eye, the painting perfectly captures Nick’s current personality — chaotic, fun, wild — and therefore it’s a terrific emotional piece of work. Jesse painted a wild horse, and over the top of it is a “painted mountain,” as she put it. It only took a second for me to realize she was depicting the painted canyons of Theodore Roosevelt National Park, where we saw many wild horses last summer. I love the way the pony is prancing. I can almost feel it moving, and it evokes a lot of magic memories from our camping trip — in particular our encounters with the wild horses. As such, it too is a terrific emotional piece of work.

These pieces aren’t especially impressive in any objective sense, and they’ll never hang in a museum, but they’re priceless treasures to me. I hope when I’m a tired old lady, sliding through the end of my days, I’ll look up at a wall near my chair and still find them hanging there.

2 thoughts on “Grumpy about my kids’ art”