Sooo tired. Migraine imminent. Jesse whining incessantly about whatever comes to mind. It’s easy to KNOW that it’s because she’s emotionally spent, but it’s hard to DEAL with it.

Because I wish she was proud of herself. She held her head up and looked confident, she showed up for her heats, and she fit right in. She was a little weird during the freestyle — I can’t even explain it, you would have had to see her — but she completed the event with a personal best. Her swimming has come so far. I wish she could enjoy what she’s accomplished.

We’ll keep working on getting her to a better place in her head. I’m weary of her self-loathing. I loathe it.

But aside from that, the long day turned out not that bad.  A very pulled-together mom (NOT ME, obviously) corralled other parents to bring stuff. 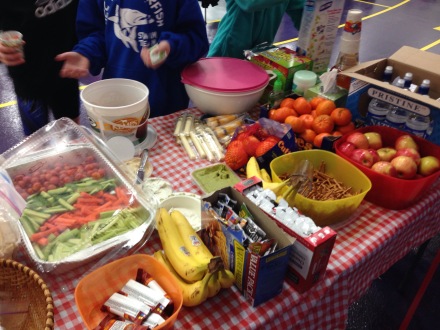 What you don’t see in this pic is the 4000 various brands of power and protein bars someone sent. There was plenty of food.

The kids entertained themselves by doing sprints on the indoor track and throwing balls and playing with electronics. It was pretty relaxed.

Nick and Anthony arrived in time to watch Jesse’s heats. Almost nothing could do a better job of putting a smile on a grumpy face than the sight of Nick cheering for his sister. He chanted “go Jesse! Go Jesse! Go Jesse!” while pumping his fist up and down like peeps used to do on freeways to ask semis to honk their horns. And, as Anthony points out, Nick chanted like this for Jesse in ten consecutive heats until she was actually swimming. (All little girls in swimcaps and goggles look the same from the bleachers.)

It was a shame Jesse was so unhappy at the end of it all, but I hope she’ll learn to feel better about this event by some time in… I don’t know, say her late 20’s? As I always say: that’s what therapy’s for.

Yes, it RHYMES. I have TIMES for that.

I whined to the swim team coach about why Jesse was only in one heat. I determined that fact by poring carefully (no really, I did) through 12 pages that look like this: 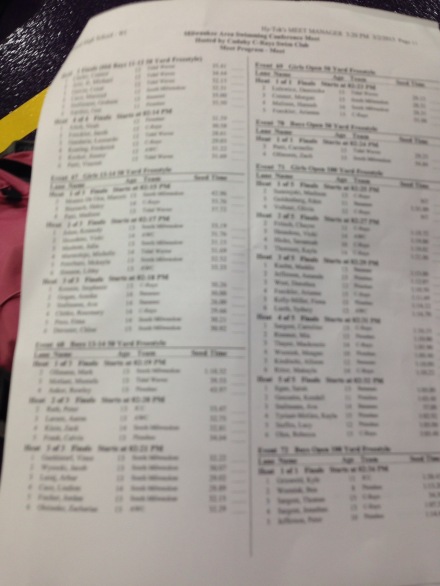 Coach said gee let me see if I can get her in a breast stroke heat.

He came back a few minutes later. “She’s already in two heats.” He showed me the line item I missed.

So we only have to wait two more hours until Jesse swims, not three.  Excellent news.

Now I’m bored AND embarrassed. I hate when I whine for no reason.

Okay I’m adjusting my attitude here. I’m trying to get more up beat. But it ain’t easy.

Everyone is swimming two events on this team except Jesse, who’s only doing the 50 freestyle. I asked why, because they promised me she’d be in at least two. The answer was inchoate. I think they think they’re doing her a favor because she’s shown some, uh, very anxious behaviors at prior meets.

But nothing could be worse than sitting around on your ass all day, waiting and waiting. And waiting. Still waiting. To swim for 45 seconds, once.

Jesse’s really struggling with this. Having a hard time staying calm.

Mm. On the up side, Jesse’s heat is scheduled for 1:45 so we won’t have to stick around until the end of the meet to leave. I hope her iPad battery holds on.

I anticipate that at approximately 1:47, I’ll be standing poolside next to the starting block for Jesse’s lane. The scene is playing out in my mind already. She pulls herself out of the pool. As her arms heave her up, I reach over and jam her sneakers on before her feet even hit the deck. Then I inspire her to run by poking her cute little butt cheeks. We scream “FREEEEEDOOOOM” like Mel Gibson’s William Wallace while we run pell-mell straight to my car, which I’ve pre-packed with all our gear. We never look back as I screech out of the parking lot, leaving a cloud of road salt behind us.

oh em gee. It’s the Sunday morning after Daylight Savings Time kicks in, and I have to bring Jesse to an all-day swim meet that starts at 8:00 am. That’s actually 7:00 am. Who does that? Who schedules something like this for 200 kids the day after DST? Some boob, that’s who, in my grumpy opinion. Plus I had to drive 30 minutes to get here and pack a bunch of food to get through the day, so I had to get up at 5:45 Real Time.

This is our JCC team’s — and my — first all-day meet. I had no idea it was A Scene. People are arriving with pillows ansd sleeping bags, giant coolers and camper chairs. It’s a freakin’ tailgate party in the gym where we all have to hang out for the next 472 hours.

Aargh. And look at the weird thing going on in the pool.

It looks like a salmon migration, only it’s children, all putting their hearts into a good warm-up before it’s even 8:00 real time.