I just spent a week on the Outer Banks of North Carolina. For seven days, I frolicked, waded, wallowed, and boogie-boarded in the Atlantic Ocean. Remarkably, and despite the ultra-hype associated with sharks this year, I WAS NOT EATEN BY A SINGLE SHARK.

One day something grabbed my foot in the surf and gave me a good little gash. When that happened (it hurt like hell) the thought immediately crossed my mind that it was a shark, so I cried out and punched about in the thigh-deep water. But then I decided it wasn’t a shark, because when I pulled my leg out of the water nothing was attached to me and my foot was still there. Good news. It was probably just a little crab I had stepped on.

Another day we drove to the Wright Brothers Memorial at Kitty Hawk. Nick and I sat together for the ranger program, along with 70 or 80 people. About 15 minutes in, Nick got bored, so then he sat on my lap while I (hopelessly) asked him to be patient and quiet. After about 5 minutes, I couldn’t take it anymore; Nick’s wiggling, squirming, bony little ass had left my thighs feeling mauled. I dumped him on the chair next to me, hissing at him to be quiet a little longer.

“OKAY,” he hissed back as he promptly jammed both his hands down his pants.

He appeared to be manipulating something so I leaned over and whispered, “Do you have to pee? Why are your hands in your pants?”

Nick answered in a bellowing hiss that echoed off the wings of the full-size model of the first airplane to ever take flight. “MY PENIS IS UP, AND I AM TRYING TO MAKE IT GO DOWN, BUT I CANNOT.”

My ears turned beet-red and I slunk loooow in my seat. I avoided all eye contact.

But it could have been worse. Instead of my tiny son giving himself a woody on my thigh, a shark could have eaten a full meal off of it.

I even let the kids get in the ocean, repeatedly and without me standing hip-to-hip with them. They, too, went uneaten by sharks. Instead they had a lot of fun.

And Nick doing the thing little kids do at beaches. I don’t know what to call it. Standing around, I guess.  But they’re happy doing it.

Lots of beach and ocean happy, no shark bites. 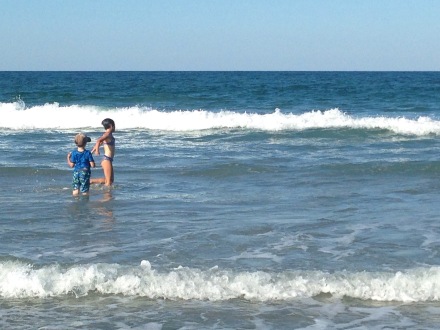 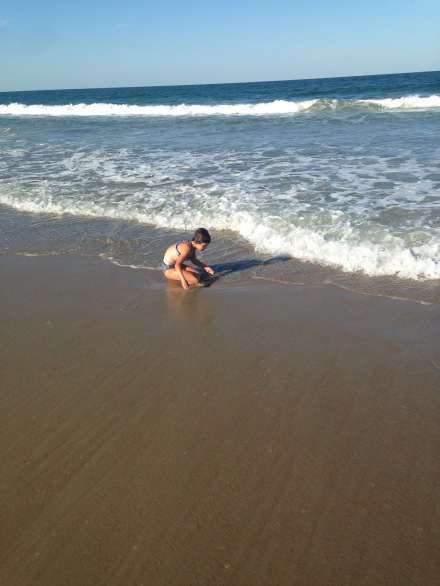 I actually don’t have a lot of pics from the beach. I was too busy having fun to take out the camera.

The sharks I fear are on dry land. They have four wheels and insane minds that make them swerve, race, and behave completely erratically. Large schools of them surrounded us during most of our drive to the Outer Banks. 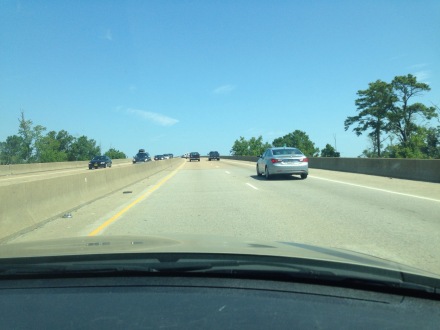 These sharks kill more than 30 thousand peeps a year in the USA alone, but we rarely hear about those fatalities in the national news. More than a thousand of those deaths each year are children. I’m more afraid of car sharks than I am of real sharks.

As we drove away from the ocean and all those water sharks I was warned to avoid, we passed a banged-up car on the grassy center shoulder of our divided highway. Two ambulances, a fire engine, and a couple police SUVs had stopped all traffic on the two lanes going the other direction. Seven firefighters surrounded the car in a bustle of activity. One was leaning into each open door of the sedan, as others hurried about with saws and other gadgets. They were working on someone in the back seat. It looked grim. I wondered who was back there — more likely a child. What story would I hear if Fox national news decided to tell me about this likely fatality? What terrifying images might Fox show me, of massive metal machines hurtling down bumpy roads at insane speeds?

I kept driving and expressed my gratitude to the universe that my family had not been in a car accident (yet) OR eaten by sharks.

There will likely be about 40,000 breast cancer deaths in the U.S. in 2015. During the week that I was frolicking blithely in the Atlantic, insolently ignoring warnings about SHARKS and enjoying myself immensely, approximately 770 women died of BREAST CANCER in the U.S.

I’m grateful that neither breast cancer nor sharks pulled me under this week.

And on and on. I’m not making light of shark attacks, or minimizing the suffering of those who’ve died from them. I just want to keep my eyes on the right balls when I decide what to be terrified by.

Life is full of risk, random suffering, and unfairness. It’s also full of fun, beauty, and being-alive-ness. This past week I got to enjoy time and the ocean with loving, playful friends and family who seem to know how to squeeze aliveness out of life.  And also, I wasn’t eaten by a shark.