Around this time last year we started pulling up wall-to-wall carpet in our bedrooms and trashing our house. Not long after, we fell into the bottomless pit of home renovations: the walls of our house came crumbling down, and my daughter’s emotional wellness was shattered like thin glass in a tornado.

The renovation journey was painful. The carpentry sub, who made a good first impression, eventually turned that into a permanently very bad impression. It took most of the fun out of things and made me not want to think about it too much (which is why I still owe you a final update on the project, dear reader). The labors we took on to make up for the carpenter’s alleged overruns, along with the work we had always planned to do ourselves, overwhelmed us. By the time we were done with our part, some time in late December or early January, my hands had been practically flayed. I’m hoping that someday many of the nerves will re-grow back down to my fingertips. In the mean time, if you need a pan taken out of a hot oven and don’t have a mitt, give me a call. I can probably bare-hand it with nary a squeak.

Even with the bulk of the renovation completed, I still labor under the crushing and currently-uninspiring weight of our tiny-things punch list. Which is to say, I am doing nothing. Nuuh. Thing. The house is still a mess as we try to figure out where we want to put stuff away. Our practical furniture is trashed and needs to be re-upholstered. We need to do a lot of touch-up painting and wood finishing (I claim to be waiting for warmer weather). I need to build some shelves and drawers in new closets so we can store things efficiently. We don’t have bed frames or window coverings. And I can’t find my sewing needles — the pin cushion is simply missing. Where did it go? I’ve been hunting for a tiny wormhole in the basement, but so far no luck.

Add to this the downward spiral of Jesse’s mental condition, and the times are right for me to sink into annoying and useless bouts of self-pity. More on all that in the days ahead. Meanwhile: 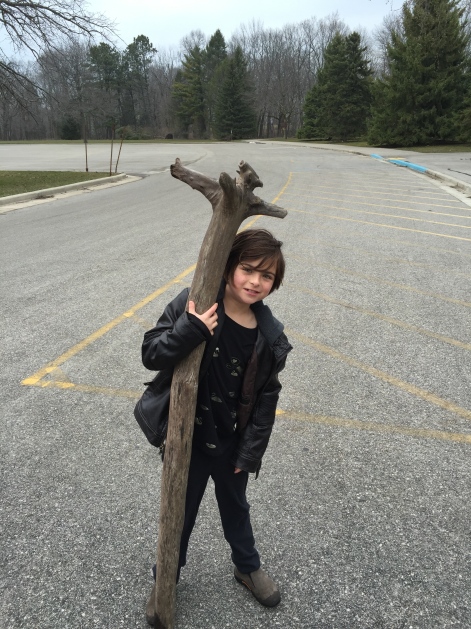 We all have our crosses to bear. Or at least, smallish lake-tossed tree stumps.

The important thing right now is this: spring is hitting Wisconsin, bringing with it many opportunities for shallow life metaphors masquerading as deep insights, moral allegories that boot you nothing, and falsely optimistic ideation. Spring limps into town around here: one day it’s 60 degrees, the next day it’s below freezing. Wisconsin Spring has a mood disorder. Look, let me show you: 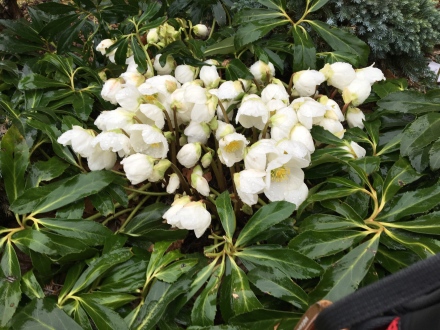 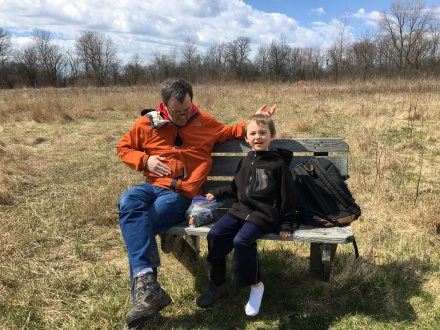 Sorry. I’m misleading you. That last picture was taken after we fled to California.

As the snow melts, we typically see signs of winter’s death, even as life digs out anew.  I find that I look for the dead things now, though I don’t rightly know why. No doubt something to do with endings and new beginnings and other inspiring or depressing metaphors, take your pick.

We found this lonely little skull along a hike a few weeks ago, during one of the first warm spells. We’re not sure what kind of animal it was. The molars suggest a plant eater, but the longer jaw might be suggestive of an omnivore, the kids argued. 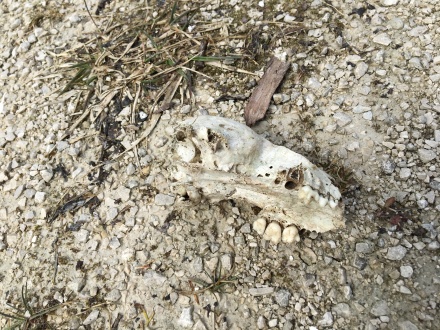 And we came across this wee critter. Mole? Vole? Don’t know. Dead? Definitely.

It looked fresh, but we couldn’t be sure. It might simply have been frozen under a bunch of snow until the night before.

We’ve spent the last few weeks weeding and clearing things out in the yard. The garlic mustard is having a banner year. We never had time to weed last spring and summer — a really critical and ongoing task when you don’t spray pesticides and herbicides — so it looked like our woods have been carpet-bombed with that blasted plant. Getting it out of a half acre of woods was as bad as knitting a XXL Irish fisherman’s sweater. It’s enough to make you search on Amazon for flame throwers.

Still, our overlooked gardens didn’t seem to mind their abandonment.

The hellebores don’t give one flying shit if we take care of them. They bloom profusely, spread seed like rabbits spread poop pellets, and ask only that I cut away dead leaves in the spring so that they can look prettier when those flowers poke up.

Look at what those snow-bound Christmas roses look like now. 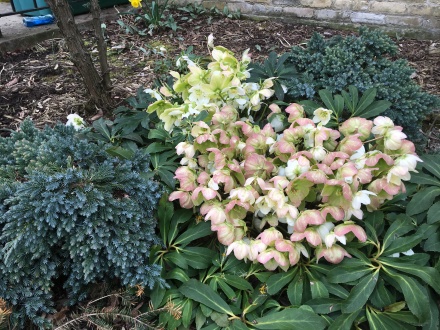 This patch of hellebores was nothing more than 3-inch tall seedlings just a couple years ago. 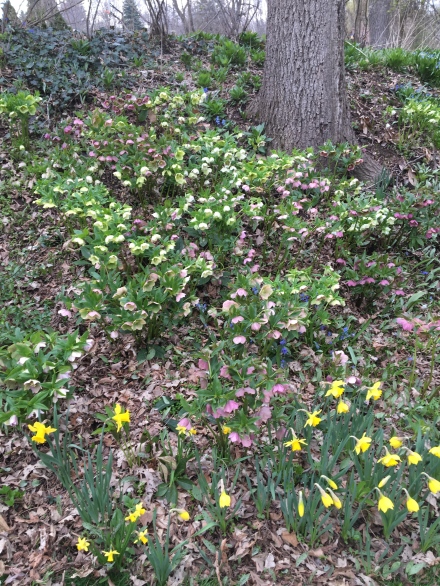 I never get tired of these little beauties.

The siberian squill has gone bonkers in the woods, creating a blue haze that confuses my eye.

Even our Virginia bluebells are thriving. A few years ago, I was out weeding before they bloomed, and I concluded they were a weed. Anthony stopped me after about 20 vigorous minutes, but I had already decimated the naturalized population. This year they’re making a comeback on their own.

Our daffodils are lasting a long time this year, and even these broad purple leafed thingies, whose names I can never remember, are coming in steady and strong.

Our newest front garden, still young and changeable as we fill in gaps, helps the house look like something out of the Hobbit at the right moments. The magnolia this year has glowing white blooms, and even the youngest hellebores have made a good show. 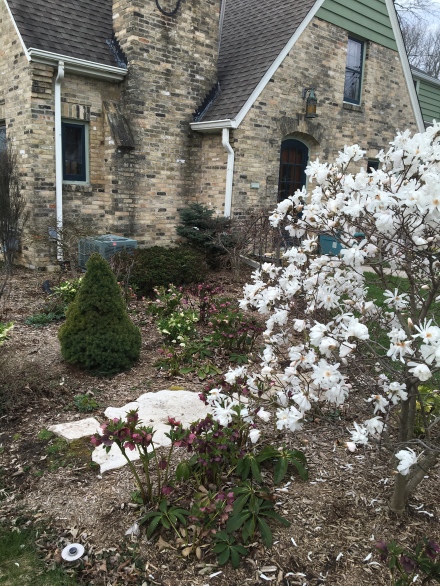 Bleeding hearts we thought were dead had simply moved themselves a foot or two up the loose rock retaining wall, sprouting unexpectedly in new spots. Still alive, just migrating. I wonder where they think they’re going?

Behind the little blue/white volunteer flowers that remain unnamed to me, you can make out the browning leaves and tiny green flowerets of two mature hellebores foetidus, aka “stinking bear’s foot.”  These friends are the children of a pricey specimen that died some years ago. I was sad but let it go and decided the climate must not be right. A couple years after it kicked the bucket, I found two tiny familiar-looking seedlings along the dirt path. I couldn’t believe it. I moved them to a warm spot on a whim and, miraculously, they survived to become these messy beauties.

Our garden is full of volunteers, like these little young hellebores in the foreground of this shot, which have seeded themselves along our rock walls. I don’t really want them there, but I don’t have the heart to move them. They’ve worked so hard all on their own, and even made pretty flowers for us. They’ve earned the right to stay. Namaste, I say to them, as I bow with respect.

The only real eyesore in our backyard is the zone around where the construction work happened, including a lot of digging for the new foundation. It’s just a ton of fill dirt.

But even here, if you set your eye to something other than bare wood, bad dirt, dead rocks, and exposed insulation foam, you see life finding a way out.

And while all these early spring blooms light things up, out front next to our decrepit front light pole, the butterfly garden and raspberry patch await the warmer months. 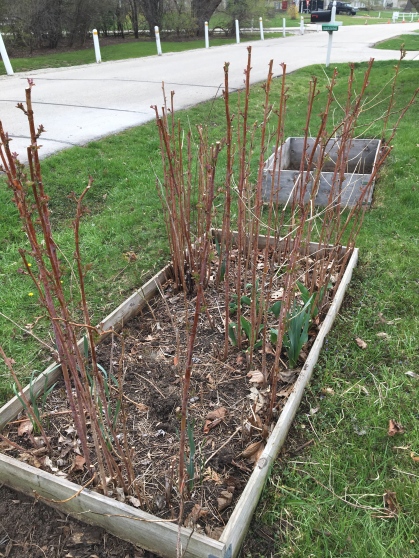 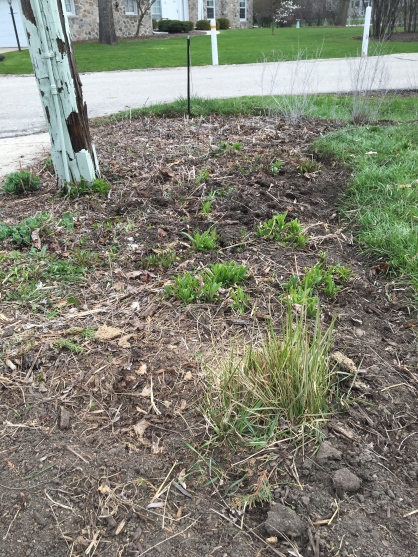 Spring gardening is the best kind of spring cleaning. Weeding, digging up garbage, staring at a pretty plant here that made it, rooting around for evidence of a well-loved plant there that didn’t make it, wandering in the woods wondering what little surprises I might find to transplant somewhere I can enjoy them better, anticipating what will come up in the days ahead — it all leaves me blank and happy for a time, filled with small wonders and empty of the worries that stalk my days. In those moments, I understand better what Jesse’s doing when she heads out into our woods and wanders around slowly, staring up into the trees and down around her feet. She’s discovering a small peace.

You’re probably waiting for me to say something meaningful and metaphorical about how gardening and nature is like parenting, and plants are like kids, and pests and weeds are like mental illness, and the sun is like hope, and blah blah blah.

Nope. I just wanted to show off our gardens, which need no anthropomorphizing to be meaningful. Make your own metaphors if you must; and if you must, you may as well do it in a garden.

One thought on “spring cleaning”