In December 1985, I met my first English mini-mince pie. Anthony brought some back to Oberlin College with him after spending Thanksgiving with his family in New Jersey. He offered me one, which I now understand was like a parched man who’s been trapped in the desert for a week, offering me the last gulp of water in his canteen. At the time, it was unlike anything I’d ever seen or tasted, a little 3-inch-round pastry. I pulled the top crust off and nibbled it, while I stared suspiciously at the brown, mucky, unappetizing-looking filling.

Hm. I pulled most of that out with my finger and ate the crust.

Anthony’s mom makes mince pies each year as a special Christmas treat. She won’t share her method or recipe, and she doles the wee pies out like scarce and costly commodities. I guess they’re HER THING. But now that we live far away, she doesn’t give Anthony mince pies anymore. I’ve been trying to emulate them for years, and I always fail. One year I made them too small, another year I made them too big. The filling is never quite right, plus sometimes I over-fill and sometimes I under-fill. And I always overcook them. The magic of Mum’s mince pies is that they’re ever so slightly undercooked. I think it must be like making kimchi, which is another beloved and generally unappealing ethnic specialty – either it comes naturally because you’ve been doing it all your life, or it doesn’t.

A few years ago Mum finally fessed up to me: she doesn’t make the filling herself. She uses a jar of Robertson’s mincemeat. I felt so special when she told me. I buy a couple jars each year around this time, and I give it a go. I try not to read the ingredient list too carefully. It includes things like suet, which I thought was for the birds. But my pies still don’t taste quite like Mum’s. I’m certain she enhances the jar ingredients somehow, but she’ll never tell.

Making bad mince pies year after year is hard for me to bear; I can usually work out how to make good food. Last year I finally made tasty mince pies — which means they passed muster with Anthony, who is a harsh and unrelenting critic. The trick was booze. I added some Cointreau to the brown muck that comes out of the Robertson’s jar, and also I undercooked the pies properly.

That was apparently a one-off. I tried to make mince pies yesterday. My crusts were tough instead of flaky or even tender. I forgot about the Cointreau and used some rye whiskey instead. I added too many currants to the mix, and I think I put too much filling in each wee pie. I over-baked them. Again. Meh. I must get bound up by performance anxiety.  But at least they look pretty-ish. 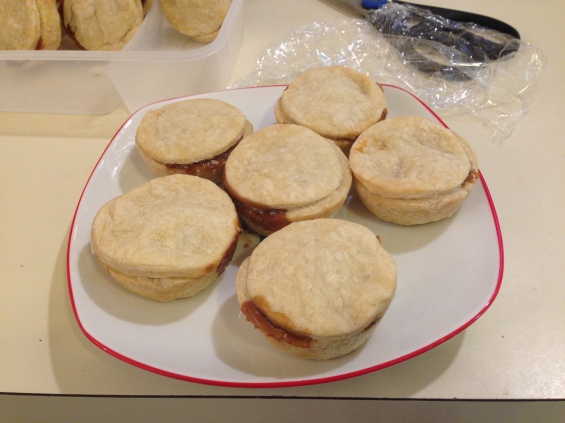 Good thing I bought two jars of Robertson’s mincemeat. You can never have too much suet in a diet, so I think in a couple days I’ll try to make some more pies. Hopefully I’ll do better.